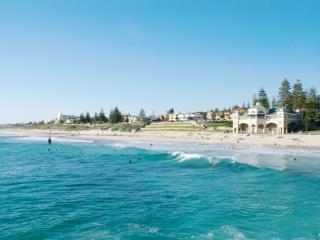 Perth is Western Australia's capital city and is perched on the Swan River, enjoying all the luxury and convenience of a modern city with stunning beaches just minutes away. Affectionately referred to as the 'City of Lights', Perth is surrounded by picturesque gardens and reserves.

Central Perth is easily accessed via its long, wide streets with the railway station located right next to the major east-west avenue, Wellington Street. Here you'll find the central shopping and business areas as well as striking historical buildings including two cathedrals, His Majesty's Theatre and Government House. North of Wellington Street lies Northbridge, a veritable cultural precinct of museums, galleries and the hub of the city's nightlife. The temperate climate of Perth lends itself perfectly to outdoor enjoyment and the inner-city gardens and parks are a treat, the most noted of which, Kings Park, has fantastic views of the river and the city.

An essential part of any visit to Perth is a stop at nearby Fremantle, widely regarded as the most well-preserved 19th-century port in the world. This bustling port town is less than half an hour from Perth and is famous for its nightlife, pubs and coffee strip within its charming harbour complex.

As Western Australia's largest commercial port, Fremantle handles the majority of the state's import and export trade. Within easy walking or cycling distance, there are a range of attractions including a contemporary circus, fine crafts, original music and theatre, galleries, museums, bookshops and buskers. The arts have become a central part of Fremantle's lifestyle, along with maritime history and extensive architectural conservation. Steeped in a rich history, Fremantle is studded with picturesque old buildings and features a wide cultural diversity yet retains much of its old world charm.