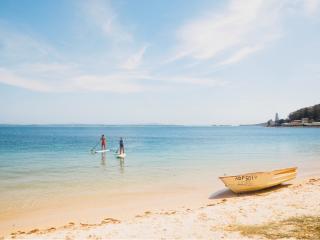 The minimum legal 'drinking' age is 18. Young people going to bars and discos should carry identification to prove they are at least 18 years old. They will not be let in otherwise. No one may buy liquor from a bar or liquor store (bottle shop) unless they are at least 18. Buying liquor for a 'minor' is illegal.

All banks have automated teller machines (ATMs) accessible 24-hours a day, generally outside the branch or in the foyer. Check with your card issuer that your charge or account-linked credit card can be used in this way, and at which bank as none accept every brand of card.

Australians drive on the left, which can be disconcerting for visitors used to driving on the right side of the road. Roads are generally good and major routes well signposted. Speed limits and distances are expressed in kilometres and vary substantially from 50 kph in residential and heavy traffic areas to 110 kph on freeways. Police use laser guns, radar and automatic cameras and speeding. Drink driving is a serious offence and heavily policed. Drivers can be stopped anywhere at random and subjected to a breath analysis test. Offenders are arrested and fingerprinted, so it can be a bad end to a fine evening or a long lunch. The legal limit of .05% is quite low - roughly equivalent to two small glasses of wine in the first hour and one an hour thereafter for men, less for women.

The NSW coast stretches from Tweed Heads on the Queensland border - right down to Eden on the Victorian border.

Australian health care professionals are highly trained and medical services are among the best in the world. Visitors from the UK, New Zealand and Finland are entitled to free or heavily subsidised medical and hospital care under reciprocal national health care agreements with the taxpayer funded Medicare organisation. All other visitors should take out travel insurance when visiting Australia. Several Australian-based travel insurers have special cover for visitors which are very much less expensive than travel cover sold in the US, for instance. Major hotels have doctors on-call.

Visitors who have a medical condition requiring treatment should ensure they carry a letter from their doctor outlining their condition and the medication required. This is also important if the drug is uncommon or contains narcotics, which may be a restricted import. Most medication is available in Australia, but only on a doctor's prescription. Prescription drugs are dispensed by qualified pharmacist at 'pharmacies' or 'chemist' shops.

New South Wales operates on daylight saving time from March to October in common with all eastern states except Queensland. Clocks are put an hour forward (later) for that period. Normal Eastern Standard Time is 10 hours ahead of Greenwich Mean Time.

No service charge applies in Australia. Tipping is not mandatory but a 10% tip in restaurants and hotel bars is normal for good service.

We strongly recommend you book travel insurance at the time of booking your holiday.