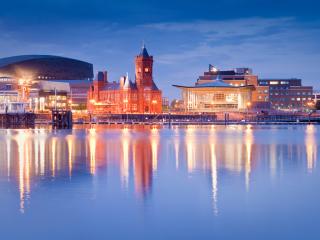 Proud of their country’s significant contributions to culture and politics, Wales is a welcoming country and its people friendly. Wales is a part of Britain and therefore also part of the United Kingdom and while the people have accepted their country’s place in the UK it should never be confused as being part of England. While it would be correct to call the Welsh people British, it would be both incorrect and offensive to call them English.

As part of the United Kingdom, Wales’ currency is the same as the British Pound Sterling (£) which is sometimes referred to as the GBP (Great Britain Pound) and is divided into 100 pence (p) or a penny, as they are known singularly. The Pound Sterling is the foreign exchange market’s fourth most traded currency and since decimalisation in 1971 has expressed £0.50 as 50p, pronounced ‘fifty pence’ or, as it is more affectionately known, ‘fifty pee’.

Most hotels offer internet access however there are also internet cafés located throughout the main tourist areas. When it comes to plugging in your devices, Wales uses the British BS1363 three-pin rectangular socket (230V/50Hz).

For international dialing use 0011 + country code + area code + local number. As Wales is part of the UK it uses the same international telephone country code which is 44. Check the area code where you are staying. When trying to contact home, particularly by phone remember the time difference. Wales’ time zone is the same as the rest of the UK, Greenwich Mean Time (GMT) for much of the year.

To drive between north and south Wales will take approximately 4 hours however the spectacular scenery, particularly on the Western route, are worth the trip. Although there is no true ‘Welsh railway system’, there are three separate lines that are part of the British system – a north Wales line to Holyhead, a line to Aberystwyth in the middle and a main line in south Wales. Regular services also connect south Wales to Cardiff, Newport and Swansea. There are also bus and coach services and the First Cymru Shuttle is often quicker than the train between Cardiff and Swansea however keep in mind that the train can be quicker in peak times as it will not get stuck in traffic.

As part of the United Kingdom, there are no border controls when entering Wales from within the UK and you will not require a passport to travel between parts of the UK, Ireland and Scotland. Although the same visa and immigration requirements as in the UK are enforced in Wales, visitors from many countries including Australia only need a passport for entry into the country and don’t require a visa for any visit less than 6 months.