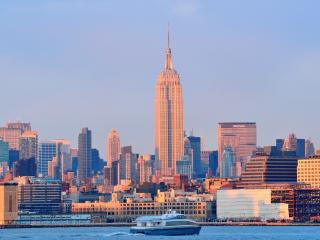 Visitors to New York should be advised that the legal drinking age is 21 years of age. Visitors may need to provide proof of age if requested to do so by establishment staff in the form of a driver's license and/or passport. Despite what the laws may be in your home country, this age restriction should be respected. Tipping is customary in New York, particularly for all service providers such as taxi drivers, wait staff, bartenders and bellhops, etc. Tips are usually provided at a minimum of 10% to 15% of the total bill, however patrons may choose to tip more for excellent service.

Most hotels and cafes offer WiFi internet access for a fee or complimentary in some selected areas, well as dedicated internet cafes. When it comes to plugging in your devices, New York uses the American two-pin rectangular socket (120V/60Hz).

For international dialing use 0011 + country code + area code + local number. As New York is part of the United States of America, it uses the US telephone country code which is +1. New York uses a number of area codes, the most common of which is +212. Other area codes include 347, 646, 718, 917 and 929, however many local numbers will list the area code at the beginning of their telephone number. When trying to contact home, particularly by phone remember the time difference. The New York time zone is UTC-5.

New York is home to the world's largest mass transport system, it's famous subway. The city itself is laid out in a grid-like pattern making navigation easy. For shorter distances, there's no better way to get around New York than on foot however be aware that the streets are extremely busy with pedestrian traffic and jaywalking is common. The bus service and subway network are a fantastic way to travel between the different boroughs of New York and are an affordable option. Be sure to pick up a MetroCard at one of the stations or vending machines so you can easily hop on and hop off. Taxis are also a great way to get around in New York, fares are quite reasonable and they can be a convenient option if you're unsure of how to get somewhere however it's worth noting that they can be hard to get during busy periods and are also subject to the traffic conditions of this congested city. Hiring a car in New York is certainly not recommended as public transportation options are excellent and affordable and the busy road conditions can be dangerous for drivers not used to them.

Visas are not required for Australian travellers to gain entry to the USA under the Visa Waiver Program (VWP) however a current Australian passport is needed. Australian visitors to the US can stay for a maximum of 90 days, however anytime spent in Mexico, Canada and Hawaii will also count towards to the 90 days. To gain entry into the US, visitors must obtain approval from the online Electronic System for Travel Authorisation (ESTA) a minimum of 72 hours prior to departure.