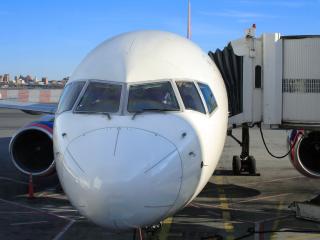 Located on the Grand Central Parkway in Flushing in the borough of Queens just 13km east of midtown Manhattan, LaGuardia Airport is a predominantly domestic airport that services more than 20 million passengers annually. Also providing connections for international flights to and from Latin America, Europe and the Pacific Rim, LaGuardia is one of three New York airports that, together with the Newark Liberty and JFK International airports, make up the largest air transport system in the United States of America.

The closest of all three airports to Manhattan, if you're flying in to a New York airport from anywhere else in the US, chances are you'll be arriving at LaGuardia. The airport is home to a total of 26 airlines including US Airways and Delta and operates 5 terminals including 4 concourses in the main terminal building. All major airline operations as well as international connections operate out of the Central Terminal Building while the remaining terminals are used by individual airlines and smaller domestic aviation services.

LaGuardia is home to an extensive range of services and amenities as well as transport options including free buses that connect the airport terminals and parking lots. There are also buses and limousine services that operate out of the airport however the most popular mode of transport is taxis. Depending on traffic, a taxi trip into the city can take between 20 to 40 minutes. A taxi fare costs between $16 to $26 depending on when and where you want to go however this does not include bridge tolls which cost an additional $3. Taxis are cash only and the general rule is to tip the driver a minimum of $1 per bag if they assist you. There are designated areas for hailing cabs so ensure you are doing so in the right area.