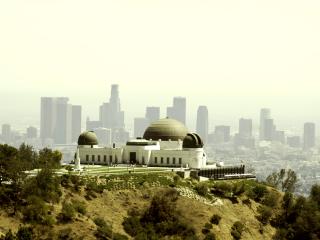 Located on Mount Hollywood's southern slope in renowned Griffith Park, the Griffith Observatory is an iconic Los Angeles attraction that is a favorite local gathering place and a US leader in public astronomy. Situated 1,134 feet above sea level, the Observatory is visible from most parts of LA and is one of the most popular attractions in Southern California, home to a wide range of science and space-related displays. Griffith Park itself covers 4,310 acres (1,740 ha) of land and is one of North America's largest urban parks. In fact, it's the second-largest of California's city parks and has often been referred to as the 'Central Park' of Los Angeles.

The Griffith Park Observatory is home to a number of science and space displays, the most popular of which include the Samuel Oschin Planetarium, Leonard Nimoy Event Horizon, Public Telescopes, Exhibit Program and the Gottlieb Transit Corridor. The Samuel Oschin Planetarium is the world's finest planetarium and features live presentations taking visitors on a cosmic journey of discovery and exploration using star projectors, lighting, digital laser projectors, a sound system and dome. The Leonard Nimoy Event Horizon is a 200 capacity theatre which shows a 20 minute presentation hosted by Leonard Nimoy taking visitors through the history, renovation and future of the Observatory.

There are a number of public optical and solar telescopes available for free public use both day and night. Approximately 7 million people have looked through the Observatory's 12-inch Zeiss telescope and the triple-beam solar telescope is one of the world's largest public instruments. The Exhibit Program offers dozens of indoor and outdoor displays including The Big Picture, the world's largest astronomical image, Pieces of the Sky, fascinating and rate meteorites and the famous Tesla Coil. The Gottlieb Transit Corridor is another popular attraction that offers a huge 10 foot wide, 150 foot long glass passageway that immerses visitors in the movement of the moon, sun and stars and demonstrates how they are linked with the calendar and time.