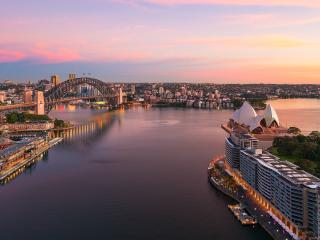 One of the most well recognised landmarks in Sydney, the Opera House is an internationally recognised Australian icon and is one of the most popular attractions in Sydney city. Located on the edge of the harbour, the Sydney Opera House is a stunning tourist attraction, architectural marvel, historically significant landmark and home to some of Sydney's best culture and theatre.

The base for the building was started in 1959 however designs were not completed for another four years. Danish architect Jorn Utzon designed the unique structure and construction began in 1962. The Sydney Opera House took a total of 14 years to build and was officially opened by Queen Elizabeth II on the 20th of October 1973.

The radical 'sail' design Utzon envisioned stretched the limits of engineering and knowledge of the time. Unfortunately, it also limited the functionality of the Opera House and although the original plan was designed to house two halls, the government demanded that four halls be housed. This resulted in space issues and despite its merits, the Sydney Opera House can't house a grand opera as its opera stage is too small.

During the construction process, Jorn Utzon became embroiled in a very large and public row with the government including over the changes to the original plans. He left Australia before the Opera House was even completed. The total cost to build the Opera House came in at $160 million and was paid for by the public through a series of lottery tickets. Available for just $10, these tickets promised a first prize of $1 million.

However the Opera House remains, even today, a fascinating building that plays a large part in the cultural scene of Sydney. Originally home to a concert hall, opera theatre, drama and recital halls and a number of bars and restaurants, a fifth theatre was added in 1998. Thanks to the addition of the theatre, the Opera House attracted over 1.4 million patrons that year.

These days, it is just as popular and visitors can enjoy a range of activities at the Opera House including regular daily guided tours of the building and walking paths which make their way through the stunning Botanic Gardens and into the city's centre.

Thanks to Sydney's fantastic range of accommodation, there are also a wonderful range of hotels and accommodation options located right near the Opera House. Few hotels enjoy unspoilt views of the Opera House however those located on the harbour's edge including Park Hyatt, Quay Grand Suites, Shangri-La and The Four Seasons are as close as you'll get to this stunning attraction.