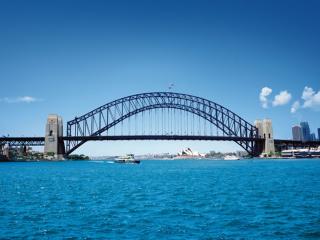 Another of Sydney's most iconic attractions is the Harbour Bridge. Held in the same esteem as the Statue of Liberty, Eiffel Tower and San Francisco's Golden Gate Bridge, Sydney's Harbour Bridge is an internationally recognised landmark. Nicknamed 'the coat hanger', the bridge links north Sydney to the city centre via two railway lines and eight lanes of road traffic.

Officially opened in March of 1932, the bridge took eight years to build and is comprised of granite clad pylons and huge steel hinges which anchor the 530m arch to the bedrock of Dawes Point and Milsons Point. The road and railway tracks are actually suspended from the arch and are raised 59m above sea level. Unlike the Golden Gate Bridge, the suspension system of the Sydney Harbour Bridge loops up.

At its highest point, the signature arch of the bridge reaches 134m above sea level. The bridge is approximately one mile long and uses 58,000 tons of steel. Prior to its official opening, the bridge was packed with trams, buses and rail way carriages to test its strength and ability to support a serious traffic jam. Designed to withstand winds of up to 200km per hour, the bridge should be able to withstand a cyclone however it has never been put to the test as winds of such force are yet to be recorded in Sydney.

Aside from its functional purposes, the Sydney Harbour Bridge is also a popular adventure attraction for those visiting the city. Opening in 1998, Bridge Climb Sydney offers the unique opportunity to climb the amazing structure including a tour over the arch. Clipped to a safety line, you'll walk 1500m over the arch and enjoy amazing views of Sydney.

If you're after something a little less adventurous, the south east pylon offers a picturesque lookout as well as a display on the history and construction of the bridge. Enter off Cumberland Street at The Rocks for stunning views of the harbour. Open daily, the lookout is one of the oldest attractions in Sydney and there are 200 steps to get to the lookout but the views are worth it. You can also walk or bicycle across the bridge thanks to safe, fenced walkways.

There are a number of accommodation options located around the Harbour Bridge, many offering unparalleled views of the iconic structure. Hotels such as Park Hyatt enjoy a lovely location on the edge of the harbour however Quay Grand Suites, Shangri-La and the Sebel Pier One also offer a great location right beside the bridge.