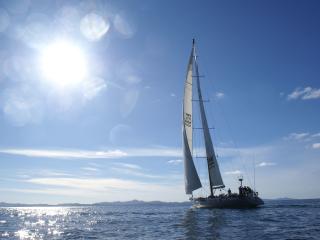 One of the most sought after golfing locations in the world, New Zealand is home to beautifully designed courses set against spectacular sceneries of forests, lakes, rugged coastline and snow-capped mountains. With over 400 golf courses to choose from, you can play year round at popular courses like Waitangi, the Formosa Country Club and Gulf Harbour, Mount Maunganui links, Millbrook and Wairakei, ranked in the top 25 outside the USA.

Discover New Zealand from a unique perspective offshore where charter and bare boat options allow you to cruise the sheltered harbours. Captain a vessel within your expertise or join a skippered charter where an experienced sailor will guide you. Auckland is home to the largest number of boats per capita in the world, earning it the nickname the 'city of sails', while Marlborough Sounds, Hauraki Gulf and the Bay of Islands maritime reserves are also some of the best sailing destinations.

Famous as a skiing destination, New Zealand is home to 12 commercial ski regions, 12 club fields, one Nordic cross-country area and a number of heli-skiing operators. New Zealand's skiing terrain is staggering, spectacular and not as crowded despite its popularity. The North Island is home to 2 commercial ski fields including Mount Ruapehu, the largest in the country. Four of the South Island's fields are found in Wanaka and Queenstown as well as Mount Hutt, home of the country's longest ski season.

One of the most popular ways to spend your time in New Zealand is surfing, particularly with so many fantastic surf spots. The Waikato Coast's Raglan offers a huge left-hand point break that's gained legendary status while Mount Maunganui, The Coromandel, Wairarapa, Gisborne, Waipu Cove, Kaikoura and Dunedin also offer excellent surf conditions.

Get up close and personal with wildlife, nature reserves, national parks, coastal regions and even volcanic attractions with the fantastic range of walking treks available in New Zealand. Renowned for its fantastic hiking, New Zealand is also home to the Hollyford Track, one of the world's best walking treks.

Windsurfing is at its best on New Zealand's harbours and inland waters where better shelter offers more suitable conditions compared to the difficult wind directions of coastal beaches. Experienced windsurfers will especially enjoy the challenging conditions of Wellington where the Cook Strait channels wind.