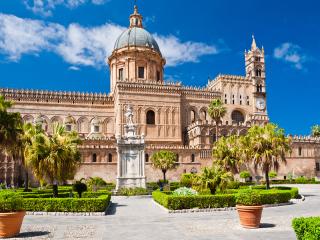 Sicily saw a series of invasions over the centuries and despite the various eruptions of Mount Etna and subsequent earthquakes it has retained a kaleidoscope of history and culture. It was founded by the Phoenicians who came from Lebanon around the 8th century BC. They first settled where Palermo is today. They were forced out of Eastern Sicily by the Greeks who arrived in Taormina on 734 BC and made this island one of their major colonies. They founded tens of cities along the coast like Taormina, Siracusa, Catania, Gela and Agrigento still in existence today. In 241 BC Sicily became Roman who unlike the Greeks who had enriched it with magnificent works of art, they reduced the island to being a granary to feed Rome.

Sicily saw later almost 250 years of Muslim dominion who arrived from Tunisia and gave it an identity that lasted for centuries. In 1061 the Norman conquest of Sicily began and lasted for 30 years. Normans amalgamated the various cultures present in Sicily at the time. During their governance the most significant astronomers, geographers, mathematicians, philosophers, artists and wonderful architects of the 12th century contributed to the island's development. Sicily continued to change hands until 1860 when Garibaldi landed in Sicily and liberated it from the Bourbons. In 1861 Sicilians through a referendum decided to be part of the Italian state.

When travelling around Sicily do not be surprised if you hear another language apart from Italian. It is a hybrid Sicilian language widely spoken in the country side. The food is also very special in Sicily with more emphasis on fish and vegetables and pasta specialties like the popular "spaghetti con le sarde".

Palermo is a fusion of art, architecture, culture and lifestyle. Here you will come across high fashion shops, Arabic cupolas and Byzantine street markets. In the heart of the old city centre is Quattor Canti (four corners) erected in 1611. Take the opportunity to visit the city's many baroque churches, spectacular mosaics and royal palaces. No visit to Sicily would be complete without getting to Monreale a small hill town just 8 km southwest of Palermo. Its cathedral is one of the most impressive medieval mosaic works of art.

Catania is the 2nd largest city of Sicily. The Greeks arrived here in 729 BC and dominated the region. After the Etna eruption of 1669 and the subsequent earthquake the city was devastated. Giovanni Vaccarini, the 18th century architect, gave a noble feel to the city and you can still discover here very fine examples of Baroque art. Some of the city highlights include the Piazza del Duomo, the Municipio, Piazza Mazzini, Museo Civico, Museo Belliniano and Teatro Romano.

Siracusa situated south east of the island enjoyed a strategic position, which gave it its eminence after the Greeks settled here in 733 BC. Ortygia is the old part of the city with almost 2700 years of history. There is a sense of romance when you walk around charming Ortygia, which features an ancient port, a great cathedral, an old castle, temples and museums all in such a short space.

Taormina is the jewel of Sicily and a best known resort. Set high on Monte Tauro it enjoys spectacular views across the sea with Mount Etna as its backdrop. If you come by train you will arrive at Taormina-Giardini station at the water's edge and you will need to take the local bus to the top. There are hotels at the sea front which is a mixture of grottoes and rocky coves, as well as on the hill with wonderful views of the sea. Teatro Greco is one of the highlights of this little town and you can also visit the Roman Odeon, the 12th century Torre Dell'Orologio and the Castello.

One of the most memorable landscapes of Sicily ought to be the summit of Etna. You can get there by road or rail and experience one of the world's biggest active volcanoes. There are several approaches to the volcano by car and you can also book a coach tour from either Catania or Taormina.

The small town of Agrigento is also a place that should not be missed during your visit in Sicily. Primarily medieval it enjoys expansive views across to the sea and looks over the Valle dei Templi just 2 km downhill. Its name derives from the numerous ancient temples in the valley, which you can visit along side with the excellent Museo Nazionale Archeologico.