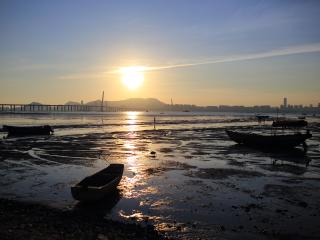 If you are short of time, this tour provides a fantastic insight into Hong Kong. Departing in the morning from your hotel, travel to Cheung Chau Island. Nicknamed 'dumbbell island' due to the islands naturally forming geography, Cheung Chau Island has been inhabited for longer than most other places in the territory of Hong Kong.

On arrival on the island the tour makes it way to Pak Tai Temple. Dedicated to Pak Tai, a Taoist god also called the ‘ Supreme Emperor of the Dark Heaven’ the temples contains artifacts from the Qing Dynasty (1644–1911) and Song Dynasty (960–1279), such as gold-plated woodcraft and iron swords. Embracing traditional Chinese architecture the temple features stone lions in the forecourt, ceramic figurines on the roof ridges and mural of auspicious motifs.

Carry on to Tung Wha Beach. A popular destination with locals the the beach known for its beautiful turquoise clear waters, soft sands and water sports such as windsurfing and canoeing. It is here that an Olympic windsurfing champion trained and brought Hong Kong their first gold medal in 1996. From here travel to see the 3,000-year-old Bronze-Age rock coverings with geometric graphics and abstract animal images.

Leaving the beach, travel on a wooden sampan to a local typhoon shelter in West Bay. The shelter was constructed as safe haven from harsh weather events for the surrounding fishing villages. Learn about the local culture and fishing traditions that were used centuries ago. From here, travel to Cheung Po Tsai Cave. The cave is named after Cheung Po Tsai, a notorious private who commanded a large fleet of around 600 vessels throughout the 18th century. After spending some time exploring the cave passages travel to a local restaurant for a Chinese Dim Sum Lunch.

After lunch, the tour makes its way to see the Tin Hau Temple. Built in the 17th century, the temple attracts lots of followers and fishing folks to come to worship the Goodness of sea, especially during the annual festival.