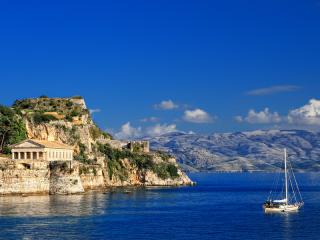 Corfu attracts thousands of tourists each year. Its 200 km coastline offers the visitor a range of sandy or pebbly beaches and picturesque coves. Most of the beaches are now developed into main resort areas but one can still find secluded bays in many parts of the island.

This island is steeped in history and findings prove that it was inhabited as early as the Palaeolithic Age. Corfu has had a succession of foreign rulers from antiquity until 1894 when it was united with mainland Greece. Romans, Venetians, French and British became the rulers of Corfu over the centuries. The legacy left behind makes Corfu an island where the visitor can experience European history in one single location.

Corfu town being the main port of the island with its Venetian influence is one of the most elegant towns in Greece. Traditional Greek villages, Byzantine churches, Venetian fortresses, museums and lively resorts make this island one of the most popular destinations in Europe.