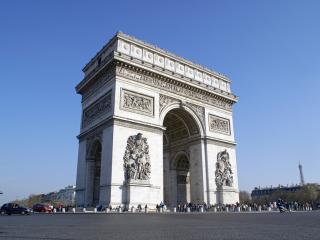 Paris is the second-largest city in Western Europe, and it is probably the city with the most things to see. The centre of Paris is divided in 20 arrondissements in a sort of spiral with the first arrondissement in the middle and the higher numbers on the outer circle. Most of the arrondissements have their own characteristics.

The majority of the world-known attractions (Eiffel Tower, Champs-Elysées, Louvre etc.) are found in the first 8 arrondissements. If your visit is short concentrate on the main highlights, but be sure you spend at least a day strolling off the beaten path. This is the only way to discover the real Paris - a lively, cosmopolitan but undeniably French city.

Probably the best-known landmark in Europe, the Eiffel Tower is as much a symbol of Paris as the Statue of Liberty is a symbol of New York. When completed, the 300m tower was the tallest building in the world. Built for the Exposition Universelle in 1889, the construction was only meant to last for the duration of the fair. The tower still stands today, despite protests from people who feared that this huge 'object' would not fit into the architecture of Paris. Today, there is no such aversion among the Parisians. At night, the tower is illuminated from within, its sweeping searchlight giving it the appearance of a huge urban lighthouse. You can climb up the stairs or take the elevator after waiting in the (long) queue.

The Pompidou Centre is one of the 20th century's most radical buildings, designed by architects Renzo Piano and Richard Rogers. Since it opened in 1977, it has become one of the city's most recognizable and popular landmarks, drawing large numbers to its excellent modern art museum and high-profile exhibitions. Inside, three levels are devoted to the Bibliothèque Publique, housing an impressive collection of 2500 periodicals (including international press), 10,000 CDs and 2200 documentary films to ponder from the relative solitude of one of its 2000 seats. The Musée National d'Art Moderne presides over two floors, while an additional floor is reserved for special exhibitions.

The Musée Picasso is housed in the magnificent 17th century Hôtel Salé. It is the largest collection of Picassos anywhere, representing almost all the major periods of the artist's life from 1905 onwards. The result is a sense of the artist's development and an insight into the person behind the myth. The museum also holds a substantial number of Picasso's engravings, ceramics and sculpture. In addition, the collection includes paintings Picasso bought or was given by contemporaries such as Matisse and Cézanne; his African masks and sculptures; his Communist party membership cards and sketches of Stalin; and photographs of him in his studio taken by Brassaï.

The Louvre is one of the largest museums in the world. Situated in the heart of Paris, along the right bank of the Seine, this palace is a must-see sight, both from an architectural point of view and from an arts perspective. It displays about 300,000 works, including Venus de Milo, Winged Victory and Leonardo da Vinci's Mona Lisa. The immense collection was displayed for the first time in 1789 during the French Revolution. The Classical 16th century palace has undergone numerous changes over the centuries. The latest addition was in the late 1980s when François Mitterrand added a futuristic steel-and-glass pyramid in the middle of its courtyard. The pyramid allows sunlight to come in on the underground floor.

The Avenue des Champs-Elysées is probably the most famous avenue in the world. This impressive promenade stretches from the Place de la Concorde to the Place Charles de Gaulle, the site of the Arc de Triomphe. At its western end it is bordered by cinemas, theaters, cafés and luxury shops. Near the Place de la Concorde are the Jardins des Champs-Elysées, beautifully arranged gardens with fountains and grand buildings including the Grand and Petit Palais at the southern side and the Elysée at its northern side. The latter has been the residence of the French Presidents since 1873. The Champs-Elysées is where Parisians celebrate New Year's Eve and historic events such as the 14th of July.

The Arc de Triomphe was commissioned by Napoleon in 1806 to commemorate his victories, but he was ousted before the arch was completed. Completed in 1836, the Arc de Triomphe is adorned with many reliefs, most of them commemorating battles. The best known relief is the Departure of the Volunteers in 1792, also known as the Marseillaise. At the top of the arch are 30 shields, each of them bears the name of one of Napoleon's successful battles. The arch features an observatory from where you have great views of La Defense, the Champs-Elysées and the Sacré-Coeur.

The Notre-Dame is one of the most famous cathedrals in the world. The site of the Gothic masterpiece has long been the religious center of the city; the Celts had their sacred ground here, the Romans chose the site to build a temple to worship Jupiter and a Christian basilica was built here in the 6th century. Construction on the cathedral commenced in 1163. It was the first cathedral to be built on a monumental scale, and it became the prototype for future cathedrals in France (such as those of Amiens, Chartres or Rheims). Completed in 1345, the result is an overwhelming building 130m long with two 69 meters tall towers. The spire, which reaches 90m, was added in the 19th century by Viollet-le-Duc. The 21-metre-high northern 13th century rose window is the most impressive of the numerous rose windows.

The most exquisite of Paris' Gothic gems, Sainte Chapelle is tucked away within the walls of the Palais de Justice. The chapel is illuminated by a curtain of luminous 13th-century stained glass (the oldest and finest in Paris). The Sainte Chapelle consists of two chapels - the dark lower chapel, with its star-painted ceiling, was intended for the servants, while the upper chapel, reached via a spiral staircase, was reserved for the court. The upper chapel is a dazzling sight, its walls made almost entirely of stained glass held up by powerful supports, which the medieval builders cleverly crafted to appear delicate and fragile by dividing them into clusters of pencil-thin columns.

If time permits, other must-see sights in Paris include the Panthéon, the Musée Rodin, the Basilique du Sacré Coeur, the Catacombes des Paris and the beautiful Place des Vosges. For aimless wandering, explore the relaxed quarters such as the vibrant Marais, elegant St-Germain and romantic Montmartre.

Paris is the fashion capital of the world. No trip to the city is complete without going window-shopping at the great couturiers (found along the Avenue Montaigne, Faubourg Saint-Honoré, the Place de la Madeleine, the Saint-Sulpice quarter or Sèvres-Babylone). The department stores such as Printemps, Galeries Lafayette and Bon Marché are Parisian institutions. Bargain hunters should visit the two large flea markets that are held outside central Paris - Porte de Vanves and Porte de Saint-Ouen (the largest of all).

Around the Saint-Michel quarter, along the banks of the Seine, you'll find the booksellers. Their stalls offer everything from antique books to comic strips, postcards and all sorts of second-hand books. Paris has many and various markets - the flower market on the Ile de la Cité, bird markets, organic markets and food markets in every quarter.