Getting To & Around Normandy 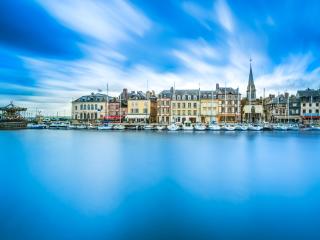 The Paris Charles de Gaulle Airport is a short 2-hour drive from Normandy. From London and Paris, there are regular flights with regional airlines to the smaller airports of Caen, Rouen, Le Havre and Deauville.

There are regular direct train connections from Paris to all the main cities in Normandy. Trains to Rouen, Le Havre, Caen, Deauville and Cherbourg depart from St Lazare train station, while Montpamasse train station is the departure point for Alençon and Mont Saint Michel (with a connection).

The easiest way to get to Normandy from the UK is by ferry on a western channel route or on a short sea route (from Poole, Portsmouth or Newhaven). Direct connections arrive in the French ports of Caen/Ouistreham, Cherbourg, Dieppe, St. Malo and Le Havre. Arriving by ferry is a popular option for travellers bringing a car from the UK.

The most convenient way to explore the coastline and interior of Normandy is by car. For those with limited time, several tour companies operate a one-day "Normandy D-Day Tour" from Paris. These tours often include return train transport from Paris, bus transport in Normandy and a guided tour of both the Normandy D-Day Landing Beaches and the Caen War Memorial.