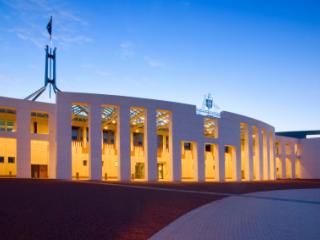 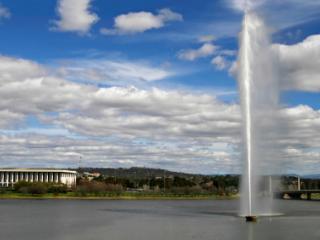 Renowned for one of the finest modern art collections in the southern hemisphere, the National Gallery of Australia is also one of Canberra's most popular attractions. With over 70,000 works, the gallery features contemporary Aboriginal artists and frequently holds grand exhibitions. It is also home to National treasures such as Jackson Pollock's Blue Poles on a permanent basis. Follow the beautiful Sculpture Garden through landscaped greenery to Mirrabrook, the outdoor restaurant on the banks of Lake Burley Griffin.

As Australia's only combined zoo and aquarium, the National Zoo and Aquarium is a popular attraction just 5 minutes from the centre of Canberra. Featuring Australia's largest inland saltwater tank and a range of fascinating animals and marine life there's something for everyone. Open daily from 10 am - 5 pm and with free parking, make a day of it and pack a picnic lunch to enjoy in the park. There are also interactive tours to come face to face with cheetahs or experience the award winning Zooventure Tour.

As the home of some of Australia's most powerful politics, Canberra's Parliament House is the centrepiece of the entire city. Built into the summit of Capital Hill, Parliament House shelters many important Australian artworks and if you're timing is right, you can even see Parliament in session. There are also guided tours which feature an informative session in the theatrette that tells the story of Australian democracy.

Located at Geijera Place, Canberra Railway Museum rests at the end of Cunningham St in Kingston, nor far from the Canberra Railway Station. Open from 1 - 4 pm on Saturdays, Sundays and Public Holidays (excluding Christmas and Boxing Day) the museum offers the rare chance to be immersed in the charming golden age of the railways. There are also BBQ facilities available at no extra charge.

Opened in 1994, the National Portrait Gallery is situated in Old Parliament House and is still in its early stages of development. Featuring themed exhibitions rotated every 4-5 months, the gallery displays artworks borrowed from public and private lenders opening up a whole new audience to the beauty of these works. Sometimes featuring artworks which have previously never been exhibited before, the National Portrait Gallery introduces its visitors to the identity, history, creativity and culture of Australia.

A must see attraction on any visit to Canberra, the Australian War Memorial is a Nation treasure paying homage to Australia's military history. The shrine and museum exhibits a vast collection of militaria, relics and paintings in a moving tribute to Australia's past and present armed forces.

Covering 50 hectares of Black Mountain, the National Botanic Gardens showcase more than 6000 species of native flora. Discover the gardens at your own pace or take one of many fascinating guided tours exploring medicinal plants used by the Aboriginal people, the lush majestic misted rainforest and the fragrant eucalypt forest featuring more than 600 species of Eucalyptus trees.